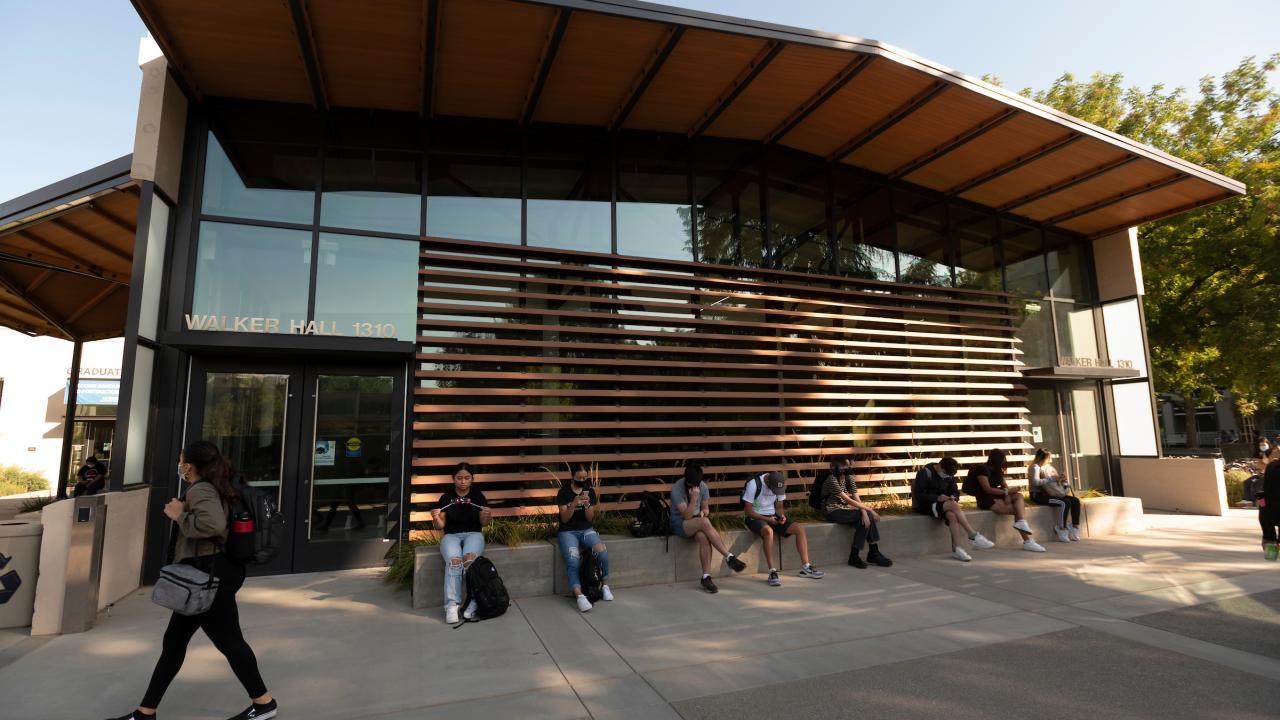 Finding a Passion for Community Nutrition

Growing up as the oldest of five children in a single-parent home, Britt Loofbourrow, Ph.D. ’22 remembers a difficult decision her family had to make every month.

“There were questions of, OK, what’s going to be the most important thing? Hot water, electricity, or food?” she recalls.

Her personal experience with food insecurity has not only inspired her doctoral research and degree in nutritional biology, but also her volunteerism with the Graduate Student Association Pantry and her future career.

“It’s exactly what I want out of life,” she said, “to use my own experiences to help boost others experiencing similar hardships.”

The first member of her family to even attend college, Loofbourrow had a thirst to learn, but no guidance about how to pursue an education. Lacking direction, she started by earning five associate degrees from junior colleges.

A guidance counselor suggested she try for a bachelor’s degree in something that really mattered to her. She loves food, so she settled on nutrition.

“Being at UC Davis has been absolutely fantastic,” she said. “After transferring, I discovered it’s ranked No. 2 in the country  for nutrition studies.”

From childhood through her undergraduate years, Loofbourrow’s personal background with CalFresh, a state version of the federal Supplemental Nutrition Assistance Program (SNAP), drew her to study nutrition and food security at a community or population level. CalFresh provides monthly food benefits to low-income individuals and families, and provides economic benefits to communities.

She decided to focus her doctoral studies on identifying barriers in knowledge, attitudes and practices that prevent UC Davis undergraduate and graduate students from utilizing CalFresh and other food access resources – specifically The Pantry, which is a UC Davis resource for undergraduates, and The Graduate Student Association Pantry, which is just for graduate students and recently opened in the Graduate Center at Walker Hall.

California is home to more than 2.6 million higher education students, however, this population is  under-represented among those who use CalFresh. Loofbourrow observed that there was no data to support that CalFresh is particularly beneficial for students. Nationally, SNAP has been proven helpful in supporting food security; but, when it comes to college students, there is a lack of data because they are a new population for this type of work, according to Loofbourrow.

“It’s based on rules about student eligibility that were published or implemented almost 50 years ago when the student population did not look the way it does now,” she said. “There’s an increasing proportion [of students] who are first-generation and from low-income backgrounds. And yet, students are largely prohibited from using it. What can this resource mean to students?”

Loofbourrow conducted two years of research throughout COVID-19-induced campus shutdowns, during which time many students lost access to other on-campus resources. But access to CalFresh actually proved to help students worry less about where their next meals would come from so they could focus on their studies. As a result, those who participated in CalFresh, on average, maintained their GPAs, while those who didn’t participate saw declining GPAs as their food security decreased.

Loofbourrow discovered that lack of knowledge was a significant barrier – a large proportion of students didn’t know if they were eligible for benefits. Regarding attitudes, those who knew about or participated in CalFresh were very positive toward the program.

“The more students knew about it, the more likely they were to participate. That was encouraging – it gives us an action point moving forward.”

Serendipitously, at the same time that Loofbourrow’s interest in food insecurity was growing, so too was campus awareness of the issue.

In 2015, the UC Davis president commissioned a study on college student food insecurity. The report presented an alarming finding: up to 42 percent of UC Davis students experience “high levels of food insecurity.” Further, this was not unique to UC Davis. According to the report, the statistic is common across nationwide higher education.

A task force sought student feedback on basic needs; put together focus groups of undergraduate and graduate students; and consulted with students, campus staff and leaders, as well as local community leaders to gather practical ideas to solve shortfalls in basic needs.

The first step to execute the feedback was to launch the Aggie Compass Basic Needs Center in June 2018. The next step was to open the GSA Pantry in Spring 2019. Loofbourrow became the volunteer coordinator soon after it opened. It was a perfect match for her research, too.

The Pantry stocks a wide range of products, from non-perishable and perishable foods to cleaning supplies and personal hygiene items. Even diapers, for those students with small children at home.

Day-to-day involvement with The Pantry over two years was illuminating for Loofbourrow. Because of its location and usage by undergraduates, graduate students who are often in roles such as teaching assistants and graduate student researchers felt less inclined to use The Pantry for a variety of reasons, not least of which was the potential awkwardness of sharing a resource with their own students.

That’s why the GSA Pantry is so valuable and necessary for the graduate student community. It is located within the Graduate Center at Walker Hall and reserved specifically for graduate students.

“Within Walker Hall, the visibility is more protected and there’s more confidentiality around it, but more graduate students will be able to see it,” Loofbourrow said, adding that her time working at the GSA pantry solidified her desire to dedicate her career to helping college students experiencing food insecurity.

Helping students from within the state government

Thanks to what she sheepishly calls her affliction of “chronically being in the right place at the right time,” Loofbourrow was offered a position as a policy analyst with the California Department of Social Services just as she was wrapping up her dissertation. The role will allow her to implement her findings on improving college student access to CalFresh.

“I’m in a position now where I can basically help to perform the future directions section of my dissertation,” she said. “I get to implement and analyze policy directly related to all of these students who I aim to help with my research, full circle. It’s great.”